Is your to-read list getting dangerously low? Or is it gigantic, but you won’t let that stop you from adding new books to it anyway?

Below are six upcoming urban fantasy books that you can’t read yet but can grab in the future. Add them to your TBR. Preorder them. Get hyped. Few things are certain in life, but at least we’ll never run out of new books.

There is only one hybrid fae in existence, and that dishonor goes to Lane Callaghan.

After a life spent dodging slurs, threats, and assassination attempts, Lane gave her past the one finger salute and ditched her former fae home for good. The detective agency she and her sisters run on the edge of Las Vegas continues to limp along, with Lane doing more debt collecting and intimidating than investigating, but anything to pay the bills. Between working for low-lifes to bring down even lower-lifes, eating cheesy poofs by the bucket, and flirting with the criminally attractive bartender where she conducts business, life is good.

That ends when a routine job goes sideways, leaving Lane with a sack full of stolen sun shards—the source of sun fae power. Without the shards, the sun fae face giving up their magic completely, or risk death if they use their power. Considering they would rather see her dead, good riddance, as far as Lane’s concerned—except her father and adopted sister are sun fae. Lane must choose—return home to save the fae bastards that almost killed her, or let them burn.

Add the book on Goodreads

In the heart-stopping sequel to The Witch King, Wyatt and Emyr attempt to rebuild Asalin despite unexpected new enemies within their kingdom.

Two weeks after the door to Faery closed once more, Asalin is still in turmoil. Emyr and Wyatt are hunting Derek and Clarke themselves after having abolished the corrupt Guard, and are trying to convince the other kingdoms to follow their lead. But when they uncover the hidden truth about the witches’ real place in fae society, it becomes clear the problems run much deeper than anyone knew. And this may be more than the two of them can fix.

As Wyatt struggles to learn control of his magic and balance his own needs with the needs of a kingdom, he must finally decide on the future he wants—before he loses the future he and Emyr are building…

When the going gets tough, the tough get their hands dirty.

Join NY Times bestselling authors Faith Hunter and Jennifer Estep along with USA Today bestselling authors R.J. Blain, Diana Pharaoh Francis, and Devon Monk on a brand-new romp through magical worlds where the damsels bring the distress, what can go wrong will go wrong, and nothing is as it seems.

Adventure with Eli Younger, Liz Everhart, and Brute in the thrilling world of Jane Yellowrock. Face off against old gods and lost souls at a magical crossroads on Route 66. Become entangled in Ashland’s dark, deadly web with side characters from the Elemental Assassin series. Return to the irreverent world of Beck Wyatt, where disaster waits around every corner and cheesecake makes it all worthwhile. And finally, meet up with the Quinns and friends in the zany world of the Magical Romantic Comedy (with a body count) series.

In this collection of all-new urban fantasy and paranormal stories, the gloves are off and simply surviving might just be the dirtiest, most difficult deed of all.

…yet he never suspected a rain-filled gutter in Portland, Oregon would be his grave.

When every advance ends in ambush, even allying himself with werewolves might not save the hunter from the trap the vampires have laid.

Former Roman legionnaire Luke Irontree stalks the dark, rainy streets of Portland to eliminate the vampires preying on his quiet city before they get out of hand. But when the streets run red with blood and the city’s most vulnerable people start disappearing, he might be too late to stop the undead scourge—or even survive.

Suddenly hunted in his own town, Luke narrowly escapes when a werewolf and a human woman save him from the threshold of death, forging unexpected friendships in the process. Can he protect his city and stay alive while training his allies, dodging hungry vamps, and recovering from grievous wounds? Will Luke uncover the sinister plan behind the disappearance of Portland’s homeless population before the vampires can add him to their list of victims and end his undying life permanently?

Unwillingly resurrected. Betrayed by family. Soulbound to a succubus.

Nadira no longer recognizes herself as the demon hunter and leader she was raised to become. Her only goal is to survive the ill-conceived merge with Roquelle before it destroys both hunter and demon.

What is she willing to do to save herself? Anything. The evil surrounding her knows it, too. Her desperate acts put both herself and the few friends she has in jeopardy. Now, she must live long enough to stop the war she started, or humanity is doomed.

A Shot of Gin

When her unique blood traits rise to warn her that something terrible approaches from the south, Gin doesn’t take the instinct seriously. That is, until a radiated zombie staggers into the casino’s club, threatening Gin’s security and home. She realizes then that the warning she felt was far more serious than she had anticipated.

The attack draws new attention to Gin and her abilities, and the powerful Vegas vampires want a piece of her. Her fanged boss Colton—a cowboy turned during the Nevada silver rush—helps her escape into the high desert, but the Vegas vampires and radiated zombies pursue relentlessly.

When the hordes finally catch up to Gin, cornered and at risk of kidnapping, she accidentally creates a nuclear explosion. With the stakes suddenly raised, Gin realizes that if she wants to save the casino and people she has come to call family, she must give up the idea of being human and figure out where her blood traits really come from.

All while trying to keep her home at the Saints Casino, and the rest of Reno, from getting nuked.

Add the book on Goodreads

What upcoming urban fantasy books are you most excited about? Share the titles in the comments! 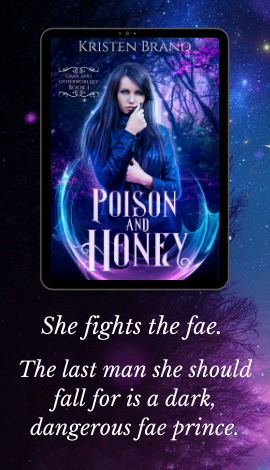